If you are like me, you are both anxious to see the last 12 months in the ‘rear view mirror ’while wondering how 2020 could have evaporated so quickly.  This Sunday we will celebrate the feast of St. Nicholas without the usual festivities that we’re accustomed to in our parishes: laughing choirs of children, pageantry, and a visit from the grand old man.  Perhaps we will have our own Domestic Church

celebrations, and if you have children or grandchildren around, I urge you to cultivate these traditions.  A good place to look for ideas is: https://www.stnicholascenter.org/how-to-celebrate/celebrate-at-home  This site, devoted to St. Nicholas, has a wealth of information and ideas, including recipes.

However, even if we do cultivate our family traditions, the feast will not be the same.  But, with every loss comes opportunity; with every challenge comes the potential for growth.  Perhaps at this time we can develop a new appreciation of St. Nicholas, one that will allow us a “grown-up” perspective on him and why he is widely venerated in so many countries and by so many diverse groups of people.

To begin with, Nicholas was a great defender of the truth in the Early Church. According to the stories about his life, St. Nicholas lived at the same time as the heretic Arius, (4th C. AD) who taught that Christ was not Divine.  Legend has it that the Saint was so angered by Arius at the Council of Nicaea that he punched him in the nose. According to the story he was ejected from the council; it was only through divine revelation in a dream experienced by members of the Council that Nicholas was allowed to return. Some people dispute this story, but whatever the details, it places Nicholas clearly in the camp of those who opposed Arius. We need to understand that Arius

had a lot of influence and many powerful clergy and bishops supported him. As well, he made excellent use of the social media of the day and was the subject of many parades and processions where great crowds would chant and sing “there was a time when the Son was not”.  Even the pope of the day, Liberius, while he did not come out in support of Arius was said to have made an equivocal and confusing statement on the subject. https://www.ewtn.com/catholicism/library/has-any-pope-been-guilty-of-heresy-1118 So, Nicholas took the position of truth, in opposition to popular culture, and even in opposition to many of his fellow bishops.  He was such a hero of the faith that he was imprisoned for a time by Emperor Diocletian.

So why was Nicholas so “all-in” on his faith that he was willing to go to prison?  Since we have no writings of Nicholas, we can only speculate from what we know of his life. He was wealthy and basically gave it all away to follow Christ. People do not generally do that because their parents or grandparents tell them to—even though Nicholas did come from a Christian family, he must have had a powerful personal experience of God’s love and saving grace in his own life. It seems unlikely that without the experience of the love of Christ, and the power of His mercy and forgiveness that one would have such a profound transformation. I don’t know about you, but even though I know and love Christ, I have trouble being even a little bit generous. 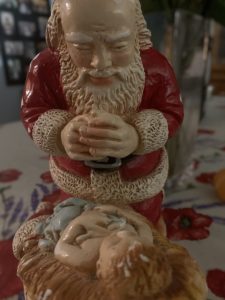 The second point that we might remember about the “adult” St. Nicholas is his love and protection of the vulnerable, particularly children and youth.  (Remember that the “St. Nicholas” of our stockings and church basements brings presents to children in so many cultures because the St. Nicholas who had gone to prison provided dowries to poor young women who were about to be sold into slavery) At a time when we are learning how important it is for all of us Christians to be vigilant in preventing and addressing the abuse of the vulnerable, we can call upon St. Nicholas as a powerful intercessor both to heal the survivors of abuse and to prevent these horrors being perpetrated in the future. And we can follow his example in taking seriously the obligation of all Christians, especially those in positions of authority, to look out for those who are in need of their protection.

So, if you are tempted to think that Santa Claus (St. Nicholas, just said with the accent of Dutch immigrants to the United States) is just a ‘jolly old elf’ who is more fantasy than real-life, think again. He is for adults as well as kids.  Let us pray for his intercession this Sunday, so that our desire for the Son of God and our decision to entrust “ourselves, each other and our whole life to Christ our God…” will grow deeper as we prepare to receive Him this Christmas.